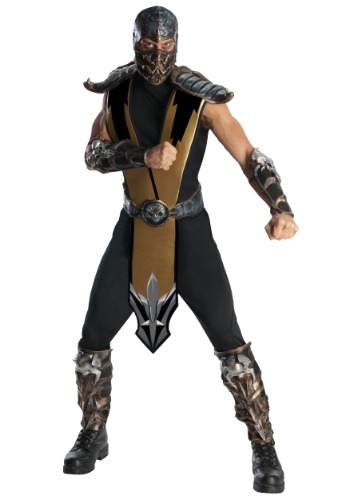 “Vengeance will be mine!”

Hanzo Hasashi is one of the most recognizable characters from the long-living Mortal Kombat video game franchise, and as well he should be: this guy is one seriously scary, cool guy! He joined the Shirai Ryu to provide for his wife and son, but they were tragically killed by the Lin Keui, led by Sub-Zero. Scorpion himself was killed by Sub-Zero but eventually resurrected as a hell-spawned specter, with his only purpose in life (death?) vengeance against Sub-Zero for the death of his family. Now that is quite a backstory!

Scorpion is one of the very few characters in Mortal Kombat who isn’t purely “good” or “evil,” and it’s that gray-area anti-hero side of him that makes him so popular (that and the awesome spear that shoots out of his hand like a scorpion tail!). He’ll do what it takes to find his vengeance, but he also fights honorably and even sometimes spares his enemies when he could destroy them. But watch out! When it comes down to it, nothing will stand between him and Sub-Zero!

Now you have a chance to portray this awesome ninja thanks to the Scorpion Mortal Kombat Mens Costume. The black jumpsuit comes with an attached gold polyfoam tabard that features black and silver detailing. Black and gold shoulder pieces attach to the arms, while there’s matching armor for the legs. A scorpion mask covers the face and completes the look. You’ll be ready to tell people to, “Get over here!” in no time. Just watch out for Sub-Zero!