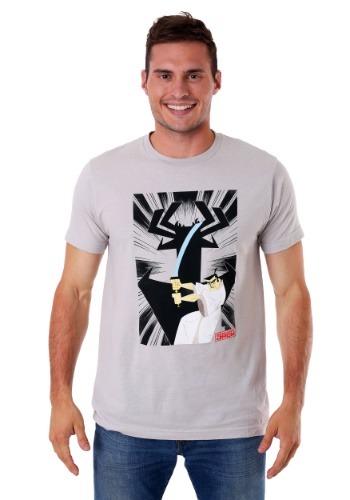 You Do Know Jack

Long ago in a distant land, I, Aku, the shape-shifting Master of Darkness, unleashed an unspeakable evil! But a foolish samurai warrior wielding a magic sword stepped forth to oppose me.

It's Samurai Jack! The opening sequence of your all-time favorite show gives you tingles. You've watched and rewatched it so many times, you could practically recite them in your sleep. What better way to honor your...ahem...obsession than by inviting your pals over for a viewing party and getting them hooked, as well? And to set the scene, this Samurai Jack Gray T-Shirt for Men takes the guesswork out of the age-old question: what does one wear to a Samurai Jack party?

This officially licensed tee may look classic in color and cut, but don't be fooled, this cotton crew-neck has the power of an ancient katana that can defeat the one and only Aku! Er...sorta. It looks that cool, at least. It features a graphic of Samurai Jack swinging his magic sword against an Aku-shaped dark shadow.

Don't worry! We've engaged in some pretty rigorous research, and studies have shown that 100% cotton is one of the few fabrics that can hold up to time travel, whether it be forward to the future or back to the past. So you can follow Jack on his adventures as long as you're wearing this tee. Just know: there is still the 3 oz. rule for liquids traveling in time. So be sure to pack light!