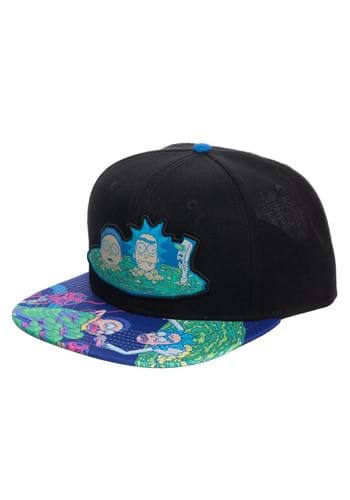 It’s all a simulation, Morty!

Rick and Morty are always jumping into parallel universes and alternate realities. They commonly come in contact with different versions of themselves which can cause some absurd scenarios. The one version of themselves they haven’t come in contact with is Rick and Morty as merch. That is because there is one world they haven’t visited yet and it’s the one you currently exist in. What would their reaction be if they entered our reality and saw all the shirts, memes, and snapbacks with their image on them? We imagine they would mistake the items for copies of themselves, but there is really no way to tell until the inevitable happens.

Our Rick and Morty Sublimated Bill Snapback is designed to fit most people and features a plastic size adjuster on the back for a more tailored hat wearing experience. The cap is black with a sewn-on patch of Rick and Morty being sucked into a portal with a crazy contraption in hand. The bill is primarily green and blue and depicts Morty in the grasp of an alien and Rick determined to pull him out and into yet another portal. This Rick and Morty Sublimated Bill Snapback is made from polyester and is an officially licensed item.