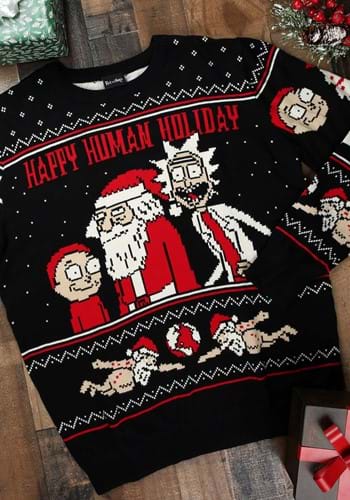 Rick’s at it Again

Egads, Rick! What have you done this time? Turning a homeless man into a living, breathing theme park is pretty normal for you. Doing it during the holiday season? Well, that might just be going too far.

It seemed innocent enough. Dress up a random guy like Santa Claus and create an educational theme park inside of his organs. Then, just use advanced shrinking technology to send patrons to the wondrous world of Anatomy Park. Of course, like all of Rick Sanchez’s “great ideas,” things don’t quite pan out as he had planned. One mishap leads to another and Anatomy Park (and Homeless Santa Claus) end up in pieces outside of the Earth’s atmosphere.

Well… at least it was a memorable Human Holidays!

This Rick and Morty Happy Human Holidays sweater commemorates the crazy… and slightly disgusting, escapade during the holiday season! It’s made out of a polyester and cotton blend, making it a warm and cozy way to celebrate your holiday. The front has Rick, Morty, and the homeless man dressed as Santa Claus on the front. It also has repeating images of giant, floating Santa Claus figures on the bottom and arms. The back of the sweater has an exploding Santa on it!

One Sweater to Rule Them All

Whether you’re trying to celebrate the Human Holidays or you’re just a huge Rick and Morty fan, this holiday sweater will put all other ugly Christmas sweaters to shame!