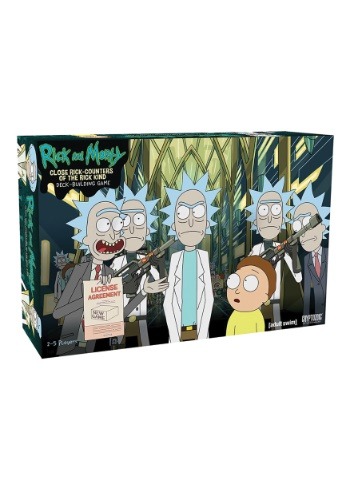 The tough part about living in a multiverse where every incarnation of yourself is a super genius is that you will probably have to deal with talking to them some day. And, when most of them team up for some kind of massive extra-dimensional council and expect you to join up... well, that's definitely going to gum up your weekend, isn't it!?

There's really only one option. It's time to destroy your other yous!

Go head to head in a battle for genius supremacy with 2-5 geniuses in a 30-70 minute deck building game with Close Rick-Counters of the Rick Kind! This card game is based on the iconic episode of the same name. Each round, you'll use your genius cards to gain power and acquire better cards, disposing of the ones that no longer make you do Rick's happy dance. Use portal gun cards to go to different dimensions, enacting new effects or acquiring those cards to improve your existing ones. As you gain better cards, you can take down or even recruit members of the Council of Ricks with the ultimate goal of defeating Evil Rick. Your family cards are a strange combination of weaknesses and advantages depending on your tactics!

When you're working to take down a bunch of Ricks from other dimensions, you know there are going to be a few Morties that get a little squashed. But, with your handy-dandy insurance card, that's just another victory point towards your goal of taking down the ultimate Evil Rick (and gaining the most victory points) in this deck building game based off the Cerberus system.