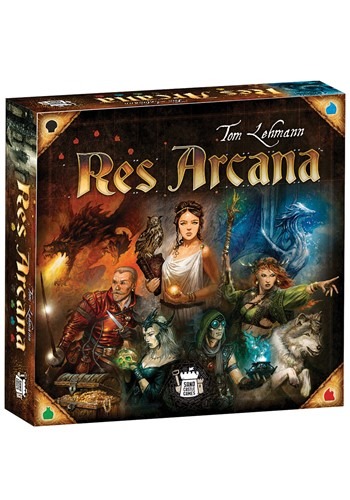 Wizards are a competitive bunch. They're always trying to outdo each other by finding new and powerful artifacts. They're always trying to cook up a more powerful potion and they never back down from a challenge by a rival wizard. Well, now it's your chance to jump into the great race to become the greatest spellcaster in the world when you play the Res Arcana Strategy Board Game.

This game is a deckbuilding game that puts you into the role of one of many different powerful spellcasters, such as Sorceror, Necromancer, Druid, Alchemist, and more. Each one has special powers, which you can use to help you gain an advantage over other players. As you try to achieve greatness, you'll be collecting magical essences, necessary components for casting spells and summoning familiars. Certain spells may even earn you victory points... and when you get ten of them before your opponents, you'll be named the most powerful wizard in all the land! With illustrations by Julien Delval and game design by Tom Lehmann, it's a unique experience for board game geeks. It's designed for 2 to 4 players, has simple deck-building elements and takes between 30 to 60 minutes to play a game. It's intended for ages 14 and older.