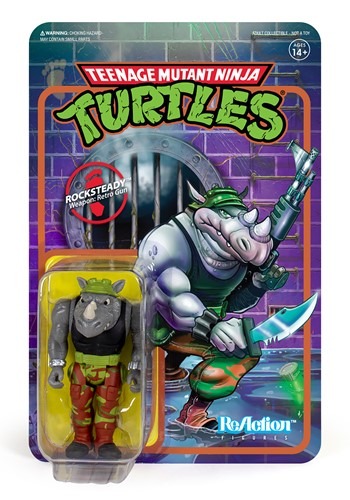 People wonder how Rocksteady got his name. We like to believe that, before all of this mutant rhinoceros business, he was big into 60s Jamaican music scene. Perhaps he was out there promoting crazy music shows for The Techniques and he showed up to every show that The Heptones put on. Maybe his true passion isn't chasing after Teenage Mutant Ninja Turtles for a boss who doesn't appreciate him. Maybe he just wants to chill out to some radical tunes...

Well, that's probably not the case, but we like to daydream about it whenever we admire this TMNT Reaction Rocksteady Action Figure.

This officially licensed Teenage Mutant Ninja Turtles action figure comes in a classic, retro style based on the original action figures for the 1980s cartoon series. It comes with limited articulation, just like old-school figures. You can leave him in the box as a cool figure to add to your collection of action figures, or take him out of the box and listen to some rad rocksteady music. Shredder probably never lets him do that, and we think he'd appreciate the change of pace. Be sure to check out all of our TMNT action figures to give him  few buddies to hang out with!