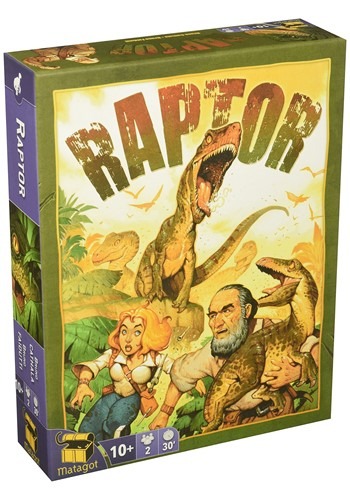 What would you do if you came across a raptor in the wild? Try to study it, right? Maybe you'd try to snag a baby raptor to raise as your own to do your bidding? Now, what if you were a raptor just chilling in the jungle? Then, some scientists come along and try to steal your babies? What would you do then? You'd hunt them down one by one!

Well, this Raptor Board Game plays 2 players and places each player in the role of either a raptor trying to protect her babies or a team of scientists trying to capture baby raptors to study.

The Raptor Board Game comes with everything you need to set up a game of raptors vs. scientists! Each player gets a deck of cards, full of special actions that they can perform. The board features various tiles, complete with jungle artwork and game spaces. Of course, it comes with small dinosaur game pieces, along with scientist game pieces!

Gameplay is quite simple. Each player secretly chooses a card from their hand, each with a numerical value on the top. Both players reveal their chosen card simultaneously. The player who reveals a card with a lower number gets to play the action on their card. The player who has the higher number gets to perform any number of actions equal to the difference between the card numbers. Scientists must move around the board to capture 3 babies or put the adult raptor to sleep to win. The raptor wins if she can successfully get all scientist off the board or by moving her babies off of the game board!