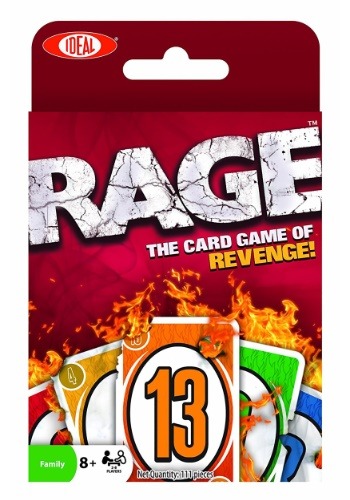 Whenever you gather up a few friends to play a simple game of cards, there are bound to be some rivalries that appear. Perhaps your opponent snatches up the round just as you were about to win. All you can do is peer at them across the table and plot how you'll get revenge for their dirty trick! Well, that's not always a healthy way of playing a game... but that exactly what we're looking for in a game of Rage!

Rage is a card game that is inspired by a couple of other widely-known games but does its best to trump them all. You'll play in a group of 2-10 players, though an ideal game has 5-8 for extra tactics. The cards are arranged in six different colors numbered 1 to 15, along with several Rage cards that significantly change the rules. Each round, players will be dealt a number of cards. 10 for the first round, 9 for the second, 8 for the third, and so on. A 'trump' card is played from the draw deck to signify the round's wild color. Each round's winner is determined by whoever played the highest card or the highest valued card of the trump color. Easy, right? Well, play a Rage card and you can cause the winner to lose points or swap the wild color or even win the round no matter what they play. Bid at the start of each round how many tricks you will win and, if you're right, earn bonus points. The winner of this 45-minute game is whoever has the most points at the end.

You've played the game of numbers and colors and wilds and reverses. Now it is time to depend a touch more on those trump cards and trick folks into playing cards they'll truly regret. It's Rage, the game of revenge!