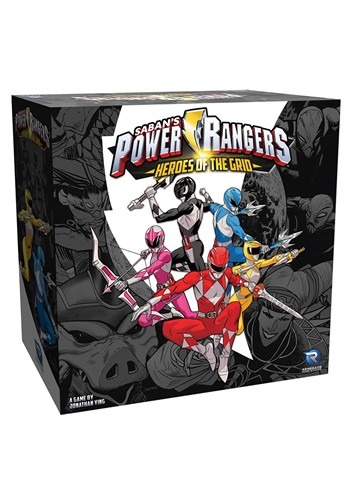 Power Rangers: Heroes of the Grid Board Game from Alliance

Rita Repulsa's at it Again...

Angel Grove seems to get into some serious trouble about every week. At least... it used to. It's been a while since we've seen any serious danger coming from the place. Unfortunately, that only means the baddies serving Rita Repulsa have been much better about their sly machinations than they used to be. Now it is time for Angel Grove to suffer some serious panic and the only ones who have any chance of saving the world are the one-and-only Power Rangers!

Answer the call of combat and join in the fun of Power Rangers: Heroes of the Grid. In this 2-5 player game, you'll take on the role of the iconic heroes of TV and film in a 45-60 minute game. The contents of the game include city locations and a central base as well as several miniature figures of your favorite characters and wicked villains. Players and antagonists alike have their own unique decks that offer up their combat abilities and also represent their health. In the Deployment phase, Rita Repulsa's minions will attack randomly determined locations in the city, trying to drive it into panic. In the Action phase, players move Power Rangers into city locations to work together and use unique maneuvers to destroy the baddies. Defeat enough to unlock your Zords and gain special actions. Get all Zords together to unleash the might of the Megazord! Make sure you protect each other and work strategically in this cooperative game because if the city falls to panic or your Power Ranger falls in combat, you can lose everything... but success means bringing down nostalgic bosses and the end to Rita Repulsa!

Relive the fun of the Power Rangers in this game that simulates their ongoing fight with Rita Repulsa, including the joy of calling on Megazord to bring the pain to the villains attacking Earth!