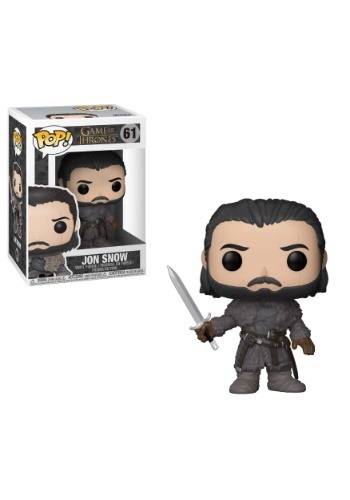 Heading north of The Wall is a dangerous proposition (like most things in Game of Thrones). You could bump into a roaming White Walker army at any moment. You could find yourself surrounded by a Wildling ambush in the blink of an eye. Of course, that’s all IF you survive the icy temperatures of the frozen wastelands. That’s why a guy has to be prepared if he plans on trekking through the wilds of the far north.

Jon Snow is no dummy (although charging into Ramsay’s army solo probably isn’t the greatest decision). When he had to spend some time trekking around beyond The Wall, he made sure to wrap himself up in some thick furs and some toasty warm gloves. This Pop! Funko Jon Snow perfectly recreates his garb during those times!

This Game of Thrones Funko vinyl figure combines Jon Snow with the classic Pop! style. He’s holding Longclaw in one hand and he looks ready to fend off a White Walker attack! He’s wearing his furry Wildling-style outfit, so he’s also ready to fend off the brutal weather of the north

Of course, the best part about this Game of Thrones collectible is that he definitely won’t make the mistake of charging into an entire army of soldiers all by himself, because he’s an inanimate object!