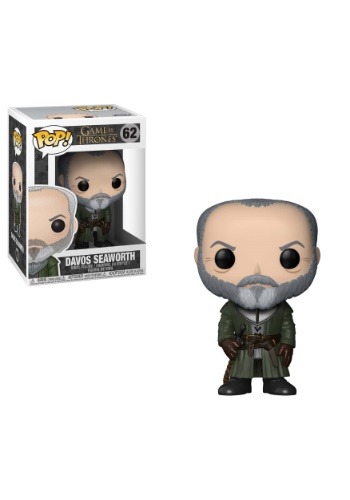 As it turns out, Ser Davos is a pretty handy guy to have at your side when you're planning on ruling in Westeros. Stannis Baratheon knew that, of course, and know Jon Snow has it figured out, too. The Onion Knight, as he is colloquially known around the seven kingdoms, is a great sidekick. Not much of a fighter! But a great sidekick.

You're a fan of the smash hit HBO series, naturally, so you wouldn't mind having a little Ser Davos of your own. So, just add this Game of Thrones Davos Seaworth figure to your Pop! vinyl collection. It's styled just like we know him from the show, and will be the perfect guy to show off your Game of Thrones stuff. No matter which house you're rooting for!

Straight from Funko studios, the Pop! TV Davos vinyl figure is HBO officially licensed. It stands about 3 and 3/4 inches tall, and comes to you packaged in a window display box. Set him up alongside your other Pop! Game of Thrones figures, and you'll have a formidable crew to show off your love of the pop culture phenomenon!