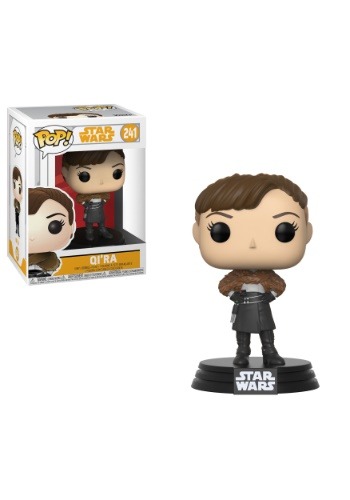 The galaxy is a dangerous place, filled with strange and exotic creatures and not an insignificant number of mischevious and murderous alien species that are willing to grasp at any single thing that will give them an extra credit or an inch more space.
So, if you're going to make it out there, you need to be able to slip into any scenario with style, grace, and a sense of survival that can't be stopped!  Such is the case of the childhood friend of our favorite smuggler, Qi'Ra from the epic new film, Solo: A Star Wars Story.

Keep this perfect reminder of strength and survival despite all obstacles with you with this officially licensed POP! Star Wars: Solo Qi'Ra Bobblehead Figure.  This 4" tall figure stands 'tall' and proud with bright, watchful eyes, even if her bouncing head is maybe a little more delightful than threatening.

BRAVE AND ADORABLE: THE PERFECT COMBO

As you get ready to venture into the galactic story once again, be sure to bring the right company along for the flight.  Who better to go with you than those that Han Solo himself trusts with his life.  Have Qi'Ra join your side with this adorable bobblehead figure today.