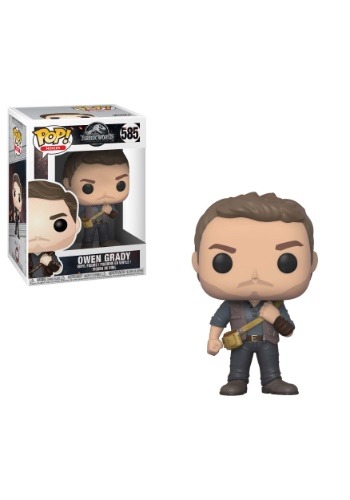 SAVIOR OF THE JURASSIC WORLD

When Bonnie Tyler belted out that she was in need of a hero, the whole world joined in the anthem in total agreement.  And, sure, we've had a few potential heroic types show up to answer the call, but they all seemed to lack a certain something.
For a while, nobody was totally sure what that something was.  Then, Owen Grady entered the scene and it all became clear.  That animal magnetism is impossible to deny!  The rugged looks, the snarky grin.  Even the dinos can't resist it!

Bring that cool swagger home with this POP! Movies: Jurassic World 2 Owen Grady Vinyl Figure.  This miniature hero might not be the conventional savior of the day, but his bright-eyed honesty and solid relationship with the raptors might just be the thing to bring us all to see the dawning of the next era!

VINYL SCRUFF FOR YOUR DINO SQUAD

Whether you've got dinosaurs already running around your home or not, it's never a bad idea to prepare for those clever little girls.  The hunters and even scientists always seem to fail to keep things secure, but this POP! Owen Grady figure will never let you down.  Just look at those guardian eyes!
Product Questions & Answers