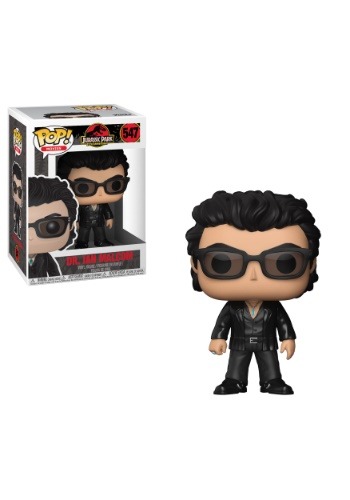 “I bring scientists and you bring a rockstar.”

Well, Mr. Hammond, can’t a guy be both? Who made it a rule that becoming a doctor in the field of math automatically means that you’re some kind of boring smarty pants? You can enjoy doing differential equations in your spare time AND wearing sunglasses. You can solve complex linear equations AND wear a leather jacket. Dr. Ian Malcolm proves that you can be a genius mathematician and rockstar all in one package! So is this Funko POP! for that matter.

This Jurassic Park Dr. Ian Malcolm POP! figure is specifically designed to recreate the character from the film in full Funko form! He’s wearing his all-black outfit, along with a pair of tinted shades to help him keep his cool factor. He has his slicked back hair and you can almost hear him spout some of his famous Jeff Goldblum-isms when you admire him on your shelf.

Of course, don’t place this tiny collectible Jurassic Park figure next to any dinosaurs. Dr. Malcolm’s long history with dinosaurs isn’t pleasant. Most of them have chased after him, tried eating him, or attempted to harm his family members. He’s best placed next to fellow scientist figures (or rockstar figures).