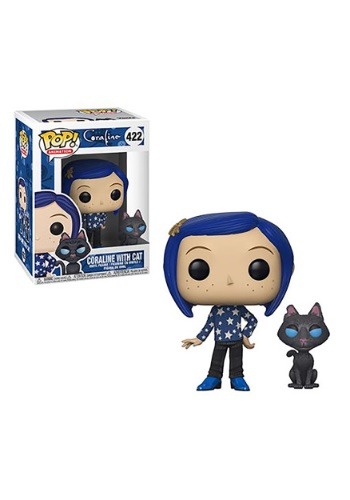 When you start talking to cats, walking away from something but still ending up in the same place, and being trapped (and maybe eaten?) by your "Other Mother" in an alternate reality, it may be a good time for a vacation.

Shut down the computer, step away from the office, and drift into your imagination, treating yourself to a movie marathon of your favorite films. A little R&R often fixes things. Of course, that wasn't quite the case for Coraline, but that was a very rare instance. So kick your feet up, relax, and revel in the magical worlds that make you happy, like Coraline!

This Pop! Movies Coraline with Cat Buddy features Coraline Jones in her coolest outfit from the film: her star sweater and boots! Sure, lots of people love the raincoat look, but this funky getup is our personal favorite. Not only that, but this 4-inch figure comes with a little cat by her side, measuring in at an inch and a half! The set is officially licensed from the film and is bound to round out any movie buff's collection.

When it's time to return to the daily grind, take this fun figure set to place on your desk at work. It can serve as a reminder that no matter how grueling your "real life" may seem—the alternative may prove...well...creepier.