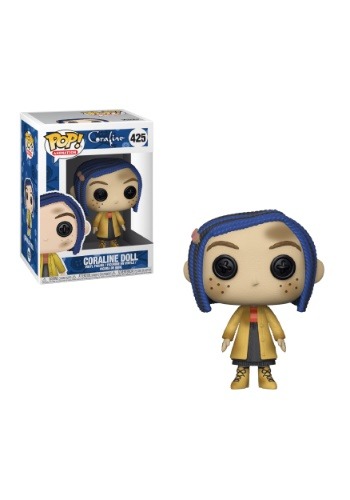 We hear your tween wants to run away from home. Hey, don't take it too personally. Most kiddos go through this at some point. We could tell you a story about how we ran away to the woods with two sandwiches, a sleeping bag, and a comic book...but we'll save it for the next time we're together.

Anyway, telling her "no" may backfire. Kids don't like to be told what to do. Maybe some subconscious conditioning will work? A viewing of the film Coraline, say, and a gift of this charming Pop! Movies Coraline Doll ought to do it! Of course, giving your child a semi-creepy but cool movie collectible with buttons for eyes as a cautionary tale may ruffle some parenting experts' feathers. So, if you do take our advice, let us know how it works (but, uh, you didn't hear it from us).

Or, maybe just stick to adding this awesome doll to your own collection of cinematic memorabilia! It's licensed from the film and crafted by Funko as part of the Animation line, and it features a 4-inch tall, button-eyed Coraline Jones in her signature raincoat and boots. She's a little worse for wear, but don't worry, the movie has a happy ending!

Coraline wants to find another reality where things are better. But the lesson she learns, in the end, will have your kid tucking herself into bed at night and even a planning a garden party...in your honor. Ta-dah!