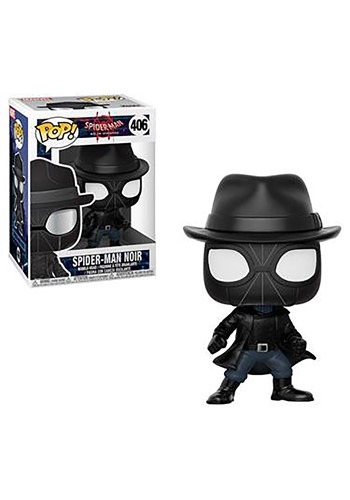 In Spider-Man: Into the Spider-Verse, we learn that there's not just one Spider-Man, there's a ton of Spider people across (who knows, maybe thousands) multiple universes and dimensions! There's the Peter Parker we know, and then there's another Peter Parker who is... different. Oh, and THEN there's a cartoon character named Spider-Ham, there's Spider-Gwen, and then there's our pal Noir Spider-Man. He seems to come from a universe that is stuck in the 1940's. He looks like a detective, and he talks like a detective. He also talks like Nic Cage, which is fun. Out of all the Spider people introduced in the hit film, we think that Noir Spider-Man is our favorite.

Right out of the film Spider-Man: Into the Spider-Verse, this Spider-Man Noir POP vinyl from Funko captures the wicked cool black ensemble costume perfectly as seen in the hit Sony Animated movie. With stark white eyes and all black details, he looks like he jumped right out of a gritty, film noir story in the 1940's. He's really the perfect thing to add to your collection, especially if you love Spider-Man and/or hard-boiled radio serials. We think he fits right in with both fanbases. Capiche?

$10.99
Item # FN29723 |       Write A Review
Items Included
Product Highlights
Size Chart
ST
Inches Centimeters
Product Description
Questions & Answers
There are no questions for this item yet. Be the first to ask a question!
Ask a Question
Reviews        Write A Review5 Total Reviews
Five Stars
By Robert Bittencourt / July 11, 2019
Was this review helpful to you?YesNo
It's a bobblehead!
By Amanda Rocha / May 28, 2019
I didn't expect it was a bobblehead. It's so cool! Some glues issues in the eyes but it's a fabrication problem. It arrived in 14 days. So fast!
Was this review helpful to you?YesNo