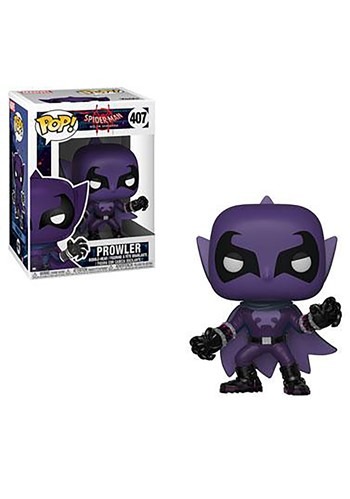 Are you on the prowl for a cool Spider-Man vinyl figure? Well, you came to the right place because Prowler is waiting for you, lurking in the shadows of an alley. A skilled burglar, Prowler is a great partner to have on your side, not just because of his thieving talents, he's also a pretty good uncle too. He'll always offer support while encouraging you to follow your passion, even if your passion involves graffiti and tagging the entire city. Heck, he'll even take you to a little-known underground spot so you can turn your artbook sketches into large murals. We know Prowler is a supposed 'villain' but the caped criminal is a pretty likable dude too, and one heck of an uncle! If you want to chill with Prowler (without having to deal with Kingpin and Green Goblin) then treat yourself with the Prowler Pop! before he flees to the shadows once again.

Measuring at approximately 4-inches tall, the officially licensed vinyl figure portrays Prowler from movie Spider-Man: Into the Spider-Verse. The character is depicted in his full disguise, complete with clawed gloves and high-collar cape.

Create your own Spider-Verse by completing your collection. Stand Prowler next to the Green Goblin and Miles Morales!