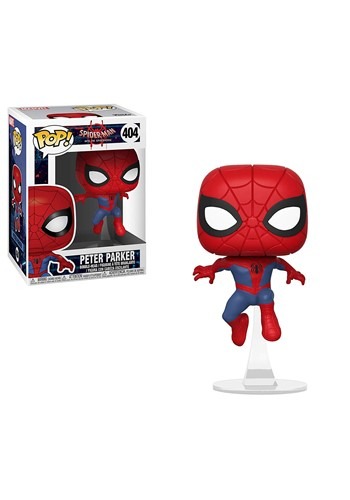 Before Miles Morales showed up, Peter Parker's life was crumbling. Sadly, the superhero became a recluse, Mary Jane left him and he started eating pizza all the time, resulting in a much heftier physique. (To be fair, constantly wearing a head-to-toe spandex suit is stressful; we feel tempted to stress-eat just thinking about it.) The once amazing Spider-Man was becoming less and less amazing day by day but everything changes when Miles (literally) fell from the sky. Peter Parker taught Miles the ropes of being a Spider-Man, regaining his purpose. This Marvel Into the Spider-Verse POP! bobblehead depicts Peter Parker (without love handles) springing into action and looks great positioned next to his little buddy, Miles.

Measuring at approximately 4-inches tall, the officially licensed bobblehead figure portrays Peter Parker in a web-slinging pose wearing his classic red and blue disguise. The figure is affixed to a clear base so it will remain upright on any desk or shelf.

After watching Spider-Man: Into the Spider-Verse, we know that Spider-People get-along great with one another! Unify all the universes by standing this vinyl figure next to Spider-Noire, Spider-Gwen and Miles Morales!