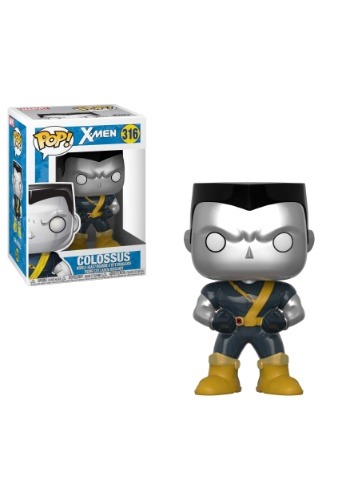 Did you spend as many quarters as we did on the X-Men arcade machine? Then you already know that sound quite well! It's the noise that Colossus makes when he uses his mutant power to dispatch bad guys. Of course, we always wasted his mutant power right away on weak scrubs, and then when the really hard waves of enemies came, we'd be left for dead! So, needless to say, we spent tons of quarters on that game.

And what does that have to do with this POP! Marvel Colossus bobblehead figure? Not a whole lot, since this tiny figure is not based on the arcade game and he doesn't make the sound from the video game. He has, however, shown up just in time for his appearance in the latest Deadpool movie.

This officially licensed POP! Colossus bobblehead figure is Funko's take on the iconic X-Men character. He has a silver paint job to help recreate the look of his metallic body. He's also wearing a nice black super-suit and some yellow boots to make him look ready for a rumble (even against the deadly Juggernaut).

This Colossus bobblehead figure plays nice with both the X-Men team and the X-Force team, so you can pair him up with figures from either team!