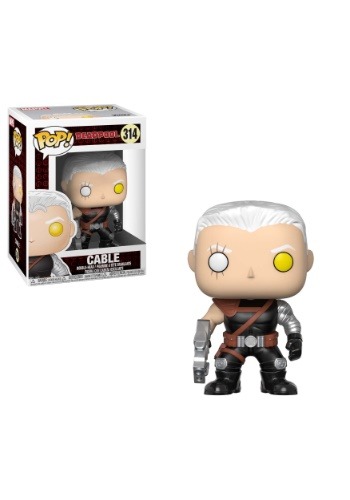 Cable, you time traveling son-of-a-gun. Would it kill you to smile every once and a while? We know that you come from a pretty messed up future and that everything went to hell in a handbasket in the far future. And maybe you constantly get paired up with that raving lunatic, Deadpool, all of the time, but you have plenty of things to smile about!

For starters, you have a metal arm. We'd kill for a metal arm. Not much is cooler than having a metal arm. Second, you have a time traveling device. Few people get the chance to travel through time, so count yourself lucky! (Just don't ever let Deadpool get his hands on it.) You're also a member of the elite team of mutants, X-Force. That's plenty of reason for at least one smile.

Well, true to his character, this Pop! Marvel Cable vinyl figure does not smile. He's incapable of it. You can try to convince him by telling him all about how awesome he looks, but he won't even smirk. He just stands there stoically, but that makes him the perfect addition to your collection. He's designed after his appearance in the Deadpool movie and he's ready to stand next to the rest of your Funko POP! vinyls.

Oh, and despite all of the smack talking he does, he secretly enjoys his friendship with Deadpool. You can place this little Cable figure right next to Deadpool to make him feel right at home!

$7.99
Item # FN30862 | Write A Review
Sale - Save 20%
Items Included
Product Highlights
Size Chart
ST
Inches Centimeters
Product Description
Questions & Answers
There are no questions for this item yet. Be the first to ask a question!
Ask a Question
Reviews Write A Review