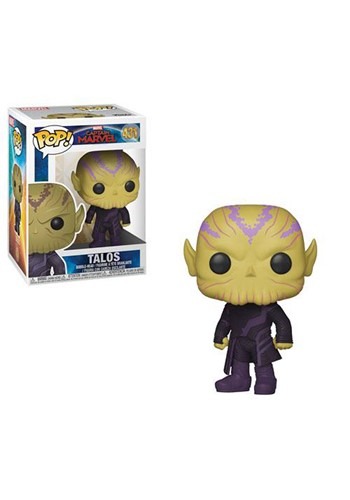 Leave Earth alone you big meanie! Seriously, why can’t crazy bad guys just leave our planet be? First, you’ve got Loki and the Chitauri, who brought an all-out battle to New York. That came complete with giant flying eel creatures trying to bust up the skyscrapers. Then, Thanos decided to bring his army of beefed-up baddies to Earth. Now, you’re telling us that this Skrull dude, Talos, orchestrated an undercover attempt to take over the Earth through espionage? Yikes! That’s some scary stuff and we’re definitely glad that Captain Marvel is on the job! Although, maybe there's a little more to his story than meets the eye...

Of course, you do have to admit, Talos is one tough looking alien. And he’d be a perfect addition to your collection! Well, now you can add the Skrull warrior to your Funko collection with this POP! Marvel: Captain Marvel- Talos Bobblehead Figure. The bobblehead figure is inspired by the character from the Captain Marvel movie.

This figure stands nearly 4 inches tall and faithfully recreates the look of the character in fine Funko form. He has his pointy, orc-like, ears. He has his green skin and purple marks on his head. He even has that bumpy jawline that makes him look like the deadly Skrull warrior that he is! Just make sure you have a Captain Marvel figure to place next to this guy to keep an eye on him!