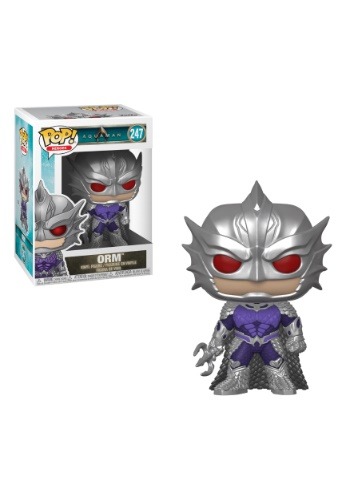 Anyone who's ever had siblings knows what it's like to deal with sibling rivalry. It all starts at a young age. One sibling has already marked their home turf and the new baby strolls on in and takes up all the attention. As time goes on the baby gets jealous of their older sibling getting special privileges like using markers and drinking out of a real cup. Then middle school comes around and the older sibling learns all these cool new phrases that get them in trouble and make their younger sibling feel like even more of a baby. Does this rivalry go away as adults? Orm would testify with a hardy, "Heck, naw!". It's just that adult sibling rivals argue over different things like who's having Thanksgiving dinner at their house or who gets control over the ocean.

Orm is ready for underwater battle with his fishy fin helmet, silver armor, and trident. He stands by himself at four inches tall, ready to face his strange land-lubber brother once and for all!

Here's the thing, despite all the trouble his older sibling might have stirred up, in the end, Orm and his Aquaman brother are blood. They've got a lot in common, they just don't know it. Collect both Aquaman and Orm and maybe they can overcome their differences before the next Aquaman movie comes out!