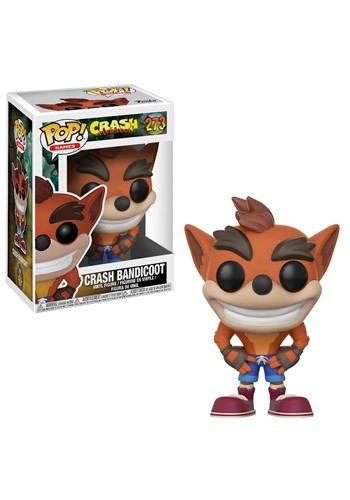 Crash may not be the brightest crayon in the box but he's certainly adorable, isn't he? He can't quite figure out how to fit a t-shirt over his extra-large head (have you ever noticed Crash's neck is missing? He's just got one very big, furry head that rests on two broad shoulders. He's ripped, but dude, where's his neck? Anyway....) and mistaking TNT Crates for ones containing Wumpa Fruit has become a slight predicament but, he's still one intimidating brute in the gaming world. There isn't a boss Crash can't beat and it's beguiling to watch him drift around slippery Sewer Speedway curves in Crash Team Racing.

Admiring the scrappiest bandicoot in the video game biz (without using a controller) is simple thanks to Funko. Now whenever you're compelled to see the speed-racing, neckless wonder, just glance at your vinyl figure-strewn shelf to see Crash standing there, ready for a Dr. Neo Cortex beatdown!

This officially licensed vinyl figure comes in a window display box, fully showcasing his 4-inch tall body. Dressed in only a pair of blue jeans and a pair of sneakers, Crash looks ready to leave his enemies in the dust.

GO! Go and get all of the Crash Bandicoot vinyl figures to complete your collection.