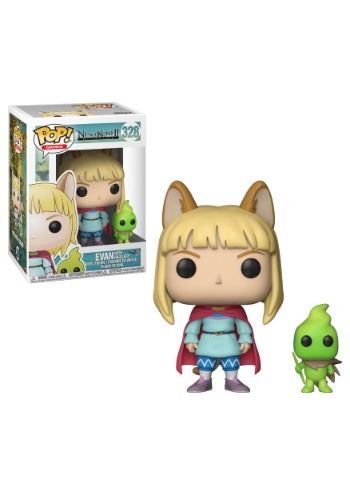 Being the king is a tough gig, if you can get it. Evan Pettiwhisker Tildrum has gone through it all as the king. He had to fight wyverns to acquire a kingmaker. He had to scour the open plains and do battle with bandits just to find a suitable place for his new castle. He’s defeated nasty monsters. He’s negotiated with a giant pug. He even had to unite the kingdoms against the threat of an evil wizard.

Being king sounds awfully exhausting, which is why you might want to let this Ni No Kuni Evan Pop! rest for a bit when you add him to your collection.

This officially licensed Funko Pop! vinyl gives you the main character of Ni No Kuni II: Revenant Kingdom. The figure has all of his adorable features, including his cat ears, his bright cape and his little tail in back. He also comes with a little Higgledy figure to go along with him! You can go adventures with this little pair, or you can try building a new kingdom of your own with these little guys.

Just make sure you don’t try inciting a coup against this little king. It already happened to him once in Ding Dong Dell and he really doesn’t need to go through that again.