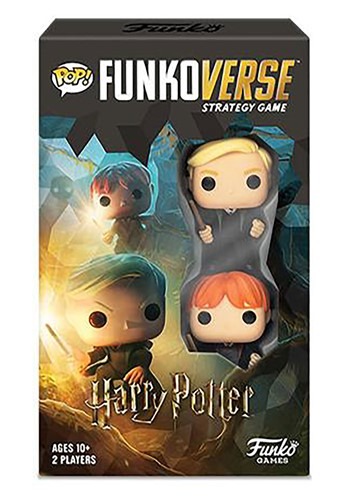 The Malfoys and the Weasleys

While Potter and Granger are going head to head with Riddle and Lestrange, people sometimes overlook their support. Ron might not be the most powerful spellcaster in the world, but he's got a lot to offer, too! And Draco isn't quite the Dark Wizard that Voldy expected, either. That doesn't mean either of these wizards are ready to lay down their wands.

It's time for the battle you've been waiting for: Ron Weasley versus Draco Malfoy, one-on-one, in this POP! Funkoverse Harry Potter Expandalone Strategy Game. This game is both an expansion to the Funkoverse Core set as well as being its very own 2-player game. Each time you play, pick one of the included scenarios or pick from ones from other sets. Choose Ron or Draco and place them on the board as shown in your scenario. On each turn, characters can take two actions. Move, chuck a spell at your rival, or go right for the points. At the cost of some cooldown time, all Funkoverse characters have unique powers they can use to give themselves an edge, as well. Combine characters as you see fit to create your own unique strategy. Get bonus points by knocking out the opposition as you complete the scenario's objectives. At the end of each round, check your point totals to see who has claimed the true Tri-Wizard Cup!

A New Ending for Draco

Sure, Malfoy ends up not being the worst guy in the world. In the end. We're talking the way, way end. Of course, sometimes you want to go a little Dark Wizard. Explore the fun of this POP! Funkoverse Harry Potter Expandalone Strategy Game to pit Ron and Draco against each other. Or bring about even more fun by incorporating the Core Set and bring Harry and Voldemort into the fray, too!