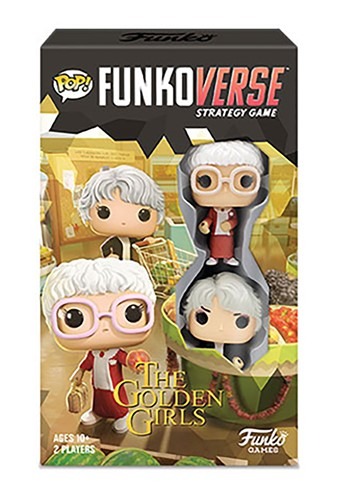 The Sicilian vs. the Sequoia

It's a good thing that Rose is always around with a strange anecdote to distract Sophia and Dorothy from whatever mother/daughter drama is about to unfold. Without that, you know that Dorothy would holler out her favorite "Shady Pines, Ma!" sort of threat. Of course, Sophia is full-on Sicilian. While the prison of a retirement community gets her shaking in her boots, she knows just what to say to stop her titan-tall 'Pussycat' right in her tracks!

Thank your people for being a friend when you live out a brand new episode of The Golden Girls with this POP! Funkoverse Golden Girls Expandalone Strategy Game. This is an expansion to the existing Funkoverse Core sets as well as being its very own 2-player game. Start the game by choosing a scenario and pick either Sophia or Dorothy. On each turn, you can take two actions with any characters you control. Let out a curse as Sophia or turn the tables with one of Dorothy's snappy retorts! Your special actions have a cooldown, so let them fly at a strategic moment at Mr. Ha Ha's Hot Dog Hacienda. Win if you have enough points to complete the objective and beat out your opponents!

It's all about the mother/daughter combo in this POP! Funkoverse The Golden Girls Expandalone Strategy Game. Join up with the other Golden Girls or get out of Miami by joining the game with one of the other core sets. (Dorothy might need to start dating outside of Florida to get a leg up on Blanche, after all!)