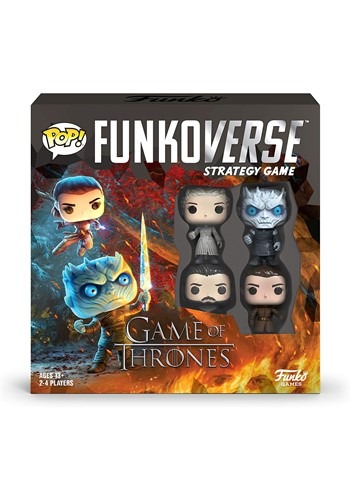 Race to the Iron Throne

We were all there for the drama, the intrigue, and wondering when the heck the dragons were going to show up. Whether you loved or hated the ending of the show, whether you had to read every word of the books or never picked them up... you know you loved the adventure of A Game of Thrones. Maybe you even wanted to get more involved. (Of course, given the chance of death in Westeros, that would probably be a bad choice.) If only there were a way to hop into the plot without risking your own skin!

Well, we have good news for you! It turns out that the Game of Thrones is a real-life game... and one involving the cutest figures you've ever seen. Join a game of Pop! Funkoverse when you bring your favorite characters into one of several different scenarios. Each round, you can move your Pop! figures or perform some of their signature actions in order to knock out your opponent or achieve the goals of the game.

Combine this game with some of the other expansions to see what happens when the Game of Thrones characters go head to head with everyone from Harry Potter to The Golden Girls. Imagine the strange season finale of that story!