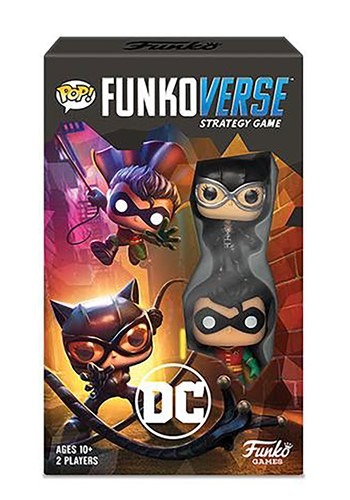 Gotham is filled with notorious villains and brave heroes. Of course, the best part of Gotham is that those guys tend to flip sides, sometimes. Is Catwoman ready to take down some of the real villains today? Has Robin just had it with Batman's controlling agenda? It's tough to say... but you'll soon discover when you watch over them in true Funko style.

Bring a couple of your favorite Gotham character to life with this Pop! Funkoverse DC Comics Expandalone Strategy Game. This game is both an expansion to the Funkoverse Core set as well as being its very own 2-player game. Each time you play, pick one of the included scenarios or pick from ones from other sets. Choose your character(s) and place them on the board as shown in your scenario. On each turn, characters can take two actions before becoming exhausted. All characters can move, challenge rivals, or complete scenario objectives. But, each character also has a set of unique powers they can use. These powers trigger a cooldown and really powerful ones might require several turns before you can use them again. (That's where the real strategy comes into play!) Knock out your rivals for bonus points as you rush to complete the scenario's objective. The game concludes when one player has the most points over the scenario's threshold.

It's Catwoman and Robin facing off in this awesome Pop! Funkoverse DC Comics Expandalone strategy game. Go head to head and use your character's unique skills and superpowers to get you points. Play with just these characters in four different scenarios, or team them up in the DC Comics Core Game to join Batman, the Joker, and more of the Gotham gang.