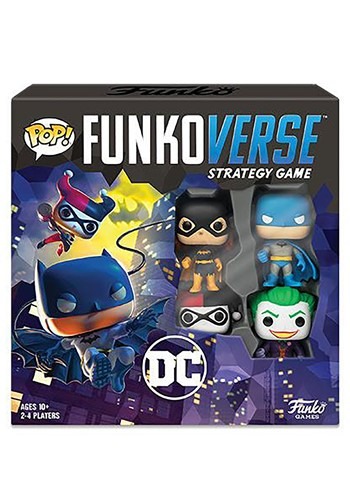 For years, we've watched the greatest detective in the world solve all sorts of mysteries. We've even watched him battle baddies throughout numerous versions, from Adam West to a toy brick incarnation. But, when your miniature Funko Batman takes to Gotham with his famous allies and infamous villains, it's time to get strategic!

Put the fun into Funko with this Pop! Funkoverse DC Comics strategy game. In this 2-4 player game, you'll dive into 20-60 minutes of combining the abilities of your favorite Gotham characters to earn all of those glorious points. Each time you play, pick a scenario that sounds exciting. Perhaps it's all about hunting down your rivals throughout Gotham City or you might be placing (or disarming) traps designed to bring the city down. Choose your character(s) and place them on the board as shown in your scenario. On each turn, characters can take two actions before becoming exhausted. Move or challenge your rivals or even use your character's unique special abilities. Powerful abilities have a longer cooldown, so be tactical when you choose to employ them! Knock out your rivals for bonus points as you rush to complete the scenario's objective. The game concludes when one player has the most points over the scenario's threshold.

The Bat-Signal is lit and these miniature Pop! vinyls are here to save the day in this Funkoverse Strategy Game. With several scenarios and the ability to change up the game even further thanks to the Expandalone sets, you'll have a constantly changing Gotham City that'll entertain for hours. Plus, when you've cleaned up Gotham for good, you'll still have exclusive Funko figures that you can't find anywhere else!