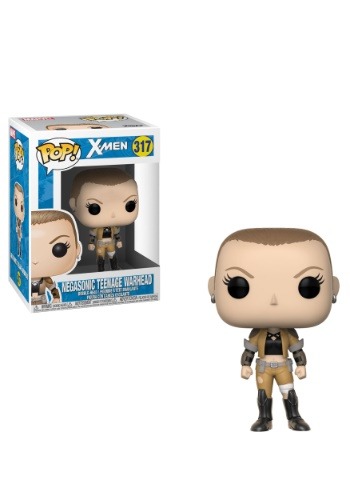 MORE POWER THAN LETTERS IN HER NAME

Being a young teenager is never going to be an easy transition.  You've got all the changes going on and a ton of societal expectations that you're hardly prepared to deal with.  Plus, just think of those high school relationships in the way!
So, when you're also a mutant who is developing some truly deadly powers.  Now, in typical Deadpool fashion, there's some question about which powers she really has.. telepathic or telekinetic... but when you've got a name like this, it's pretty accepted to stay away from you!

The best way to ensure safety when you're in a world with mutants to make sure that you show them respect and friendship, especially if they're going to be bound for the Hellfire Club if you don't.  Keep this pint-sized disaster waiting to happen toned down by keeping this POP! Marvel Deadpool Negasonic Teenage Warhead Bobblehead Figure close to you.  She's way more likely to blast something else.

TO TELEPATHY OR TO TELEKINESIS?

When Deadpool was deciding what kind of movie he wanted to be in, he knew he'd need some amazing co-stars.  He didn't really think about who to match, just that he wanted explosive power and a cool name.  So, somewhere along the lines, Negasonic Teenage Warhead became a blaster instead of a mind-reader.  But, if this POP! Figure has anything to say about it, she seems to be doing pretty well with the adjustment.