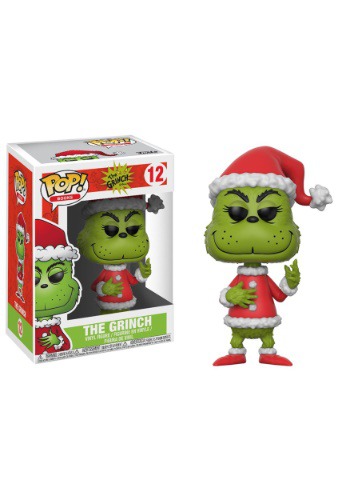 The Grinch's mission was to stop the annoying hubbub of Christmas. He slipped down chimneys and stole every single item that would make the holiday happen. That included the stockings, the tree, and even the holiday ham! It must have been such a rough awakening for those poor Whos but they certainly made a quick recovery. Christmas is still Christmas when you're breakfasting on peanut butter and jelly sandwiches!

Well, maybe the Grinch would have stopped in his tracks if he had seen this little tribute on a mantle! It's a great little figure for those people who see things from the Grinch's point of view in both past and present enlightenment. This Pop! Vinyl figurine has a smug expression and his hands are paused in a moment of pontificating. His decked out in his Santa gear and we can only hope that his holiday heisting days are over after all, the Grinch, himself is supposed to carve the roast beef!