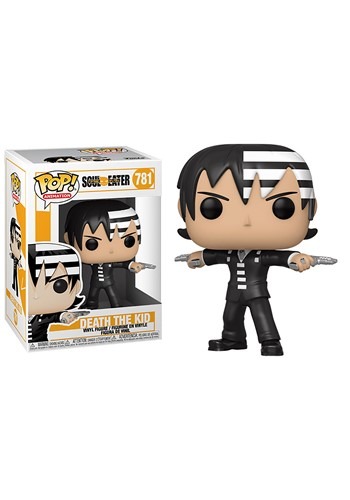 Look at that stance. Legs perfectly spaced apart. Two guns pointed in opposite, but equal directions. A smug look on his face that's perfectly symmetrical. It's so pure. An signal to the heavens that all is right and beautiful in the world. And just look at his hair... wait a minute. No. NO! NOOOOO!!!! Three white lines! How could this be? There's three of them and they're only on one side of his hair. Harmony is ruined! How could anyone except that asymmetrical hairstyle. Dirty. Filthy. Disgusting! Ooooh, how can he even go on like this? Such an atrocity upon the world!

Oh well, it can't be helped. Even the son of Death himself can't be 100% perfect. It's something that Death the Kidd struggles with every day (that and his sometimes distracting obsessive-compulsive tendencies). He's tried to get rid of those stripes, but they just keep coming back. This Funko Pop! Soul Eater Death the Kid Vinyl Figure shrinks down the anime character into a cute figure, white stripes and all. He's the perfectly imperfect addition for your collection. He's quite symmetrical, except for those white lines in his hair. He's painfully aware of them and he'd appreciate it if you didn't mention them around him.