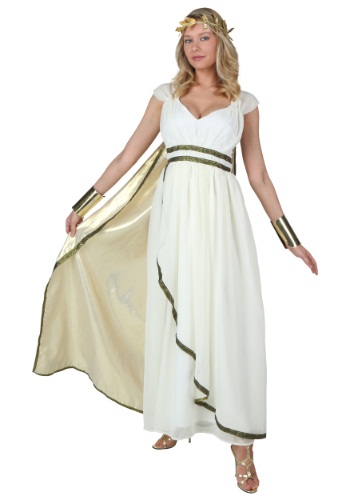 We need three hands to count all the wicked villains who, after granted near unlimited power through genie wishes or other relics, let their ambition be their undoing. Always concerned and consumed by the accumulation of power, it leads them to wishing to become powerful sultans, rulers of vast kingdoms. Some wish for mighty wizardry or, in the foolish choice of one Arabian Night’s court advisor, to become a genie himself. Even after a firm warning about the cramped if relatively cheap living space.

Perhaps it's time to test the limitations of such power—and we think you'd make the perfect deity. We think it is time to test the limitations of godhood and you look like you’d make the perfect deity. We can trust you with the power of the immortal and heavens-dwelling gods, right? …Either way, (we don't want to consider what might happen if we're wrong), we’ve got you ready with your divine raiment, this Plus Size Adult Goddess Costume.

As is appropriate of the mighty deities, your power shines through the elegant and simple sleeveless empire-waist dress. It is fully lined in a chiffon bodice and is trimmed in shimmering black and gold design that perfectly contrasts and accentuates the ivory white of the gown. Your heavenly crown is in the form of a golden leaved laurel headband. Bring the whole family to the divine realm with the Child Goddess outfit, too!

Most godly beings never learn their lesson. Their genie wishes or outsize ambitions lead them to limitations that bring about their undoing. You’d think after planning for so many years that they would have come up with better options! Like… godhood. We’ve seen hundreds of wizards and witches and there are, presumably, just as many kings and even emperors… but how many gods do we still hear about these days? The Greeks, of course, have lasted long into the modern stories, probably because they always have the most scandalous stories… not to mention untouchable style! Good thing we modeled this Plus Size Goddess Costume in their glowing image.