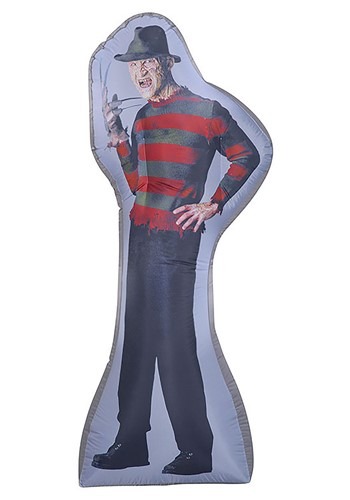 As Good as Fred

Let's face it. There just hasn't been a horror movie villain quite like Freddy Krueger. Some of those other characters might be good at terrorizing teens and they also might be able to match Fred's kill count in movies. That counts for something, but Freddy Krueger can invade your dreams. That means even when his victims have a moment of respite, they can't go to sleep, because he'll show up!

Well, now Freddy Krueger can invade your Halloween decor! When you bring this Photo Realistic Inflatable Freddy Krueger decoration home, it's almost like he's really there!

Based on the freaky character from A Nightmare on Elm Street movies, this Inflatable Freddy Krueger decoration lets you bring the best horror movie villain to your home. It's made out of a windbreaker, nylon style material and has the printed image of Freddy on the front. Just plug the decoration into an outlet and it'll automatically inflate. When fully inflated, Freddy stands nearly 6 feet tall. It even lights up to give him a creepy glow, which is eerie at night! This decoration is rated for indoor and outdoor use, so you can set Freddy up anywhere you like!