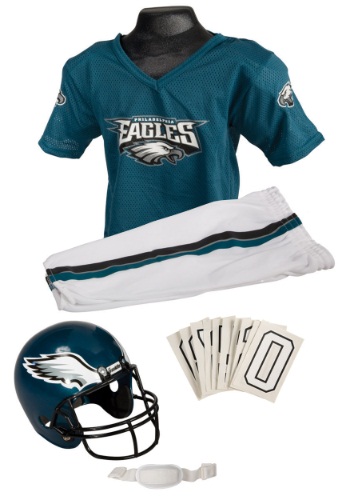 This Philadelphia Eagles NFL Kids Uniform is created for exactly those kinds of fans. We know that someday, your little guy will be the star quarterback on the real team, but until he’s drafted, this is just the thing to help him get into the right mindset as he practices his throws and field goal kicks. The officially licensed Eagles uniform comes with a teal jersey that has the Eagles name and logo printed on the front, white pants with teal side stripes and a teal helmet with the Eagles logo printed on both sides. The back of the jersey is left blank so you can iron on any number you want, depending on your favorite player. (Numbers are included.) Your kid will be ready to score the winning touchdown in no time!