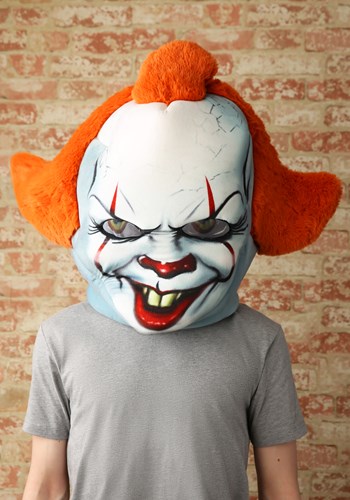 In It to Win It

Pennywise has had a few rough years lately. For a long time, Pennywise could terrorize Derry in peace. Feasting on fear every twenty-seven years, the people of the town didn't even think to march down to the sewer and show that ageless entity what was what. But then those gosh-darned losers rolled up on their bicycles and started raining on this clown's parade. That last confrontation almost had poor Penny on his back for good. Mean kids, the losers. What does Pennywise need from the people of the world to rise again? He needs support! That's right, he needs some rahs-rahs, some whoots, some hoots and hollers. Pennywise is in a bad way, slip this mascot head over your noggin and Pennywise will be back, representing the scariest of the scary!

This mask is a great way to add a punch of drama to your Pennywise costume! The oversize head is printed with the dancing clown's trademark grimace, er, smile. The golden eyes are printed on a sheer mesh that's laid over the wide eye holes, allowing you to see who you're scaring. Trimmed in wild orange hair, this mascot head will have you representing all that's spooky this Halloween. You'll be ready to roll as soon as this shows up at your doorstep. In the meantime, let's hear a cheer for fear!