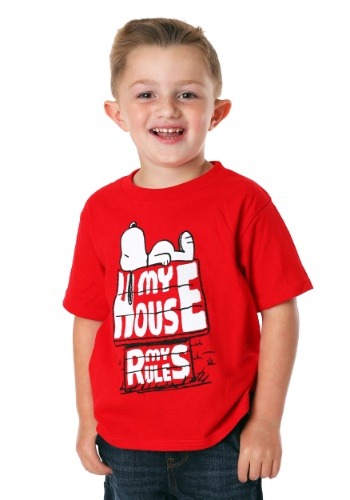 Does your young one dance to their own tune? Do they march to the beat of their own drum? Are they happy in their own world doing their own stuff? Well, then it sounds like they're similar to our favorite wise-dog, Snoopy. Snoopy has his own doghouse, and at his doghouse, he's in charge. He can play pilot or simply take a nap in the sun. It doesn't matter because it's his doghouse so he does what he wants. If your little one is like Snoopy, then maybe it's time we let everyone else know with this Peanuts Snoopy My House My Rules T-Shirt. This 100% red cotton t-shirt has a graphic on the front of Snoopy laying, in Snoopy-fashion, along the ridge of his doghouse. On the doghouse, it says "My House, My Rules" in big white lettering. Pretty appropriate for Snoopy, no? And maybe, just maybe, it sounds like your kiddo too. Always trying to make their own rules. Kids, right?