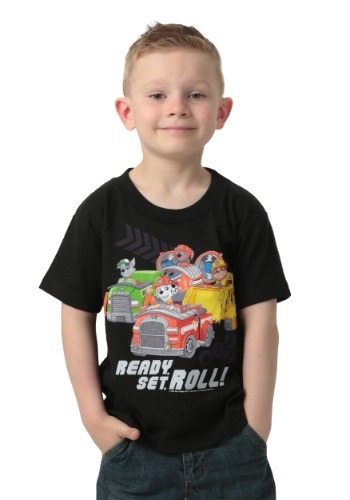 If you have any little ones, chances are you've heard about the Paw Patrol. You know, the squad of adorable dogs that head out on rescue missions? Yes, them. They've got adorable little catchphrases and doghouses that transform into rescue vehicles, not to mention their friend Ryder, a little boy who runs the bunch. They each have special skills and focuses, from recycling to construction, and they're always there to save the day (even if Marshall does end up falling all over everything).

And chances are , if you're little one is as into Paw Patrol as we think, then they love the toys, the shows, the books, and anything else Paw Patrol they can get their hands on. In which case, allow us to show you our Paw Patrol Ready Set Roll T-Shirt. It's a black 100 percent cotton T-shirt, officially licensed with four of the Paw Patrol squad on the front. The characters are ready for the rescue in their emergency vehicles with the catchphrase "Ready, Set, Roll!" This way your little Paw Patrol enthusiast will look like part of the team! Remember: No job is too big and no pup is too small!