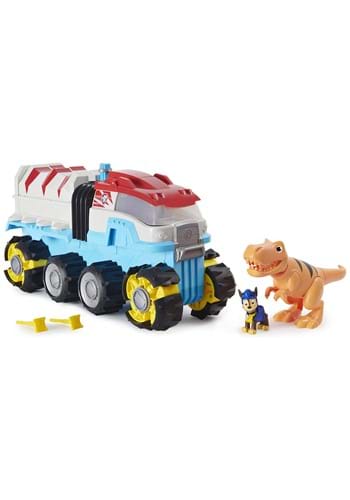 When one dastardly Humdinger scheme reveals a world filled with dinosaurs, there’s nothing more for the Pups to do than save the day and make some dino-friends along the way. Unless, of course, your kiddo is running the show. Chase and a T-Rex might charge into action to rescue Marshall from Humdinger’s Kitten Catastrophe Crew. A pterodactyl may replace Skye’s helicopter. And triceratops may help Rubble make way for even more adventure!

Help your kiddo’s imagination run as wild as where the dinos roam when you bring home this Paw Patrol Dino Rescue Patroller Motorized Vehicle! The officially licensed toy includes everything needed to relive and reimagine the fun of Paw Patrol’s season 7 dinosaur episodes. With 2 projectiles, a T-Rex figure, and Chase to drive the Dino Patroller, there’s no telling where your child’s playtime missions will take them. And with the necessary AA batteries included, there’s no delay to getting started!