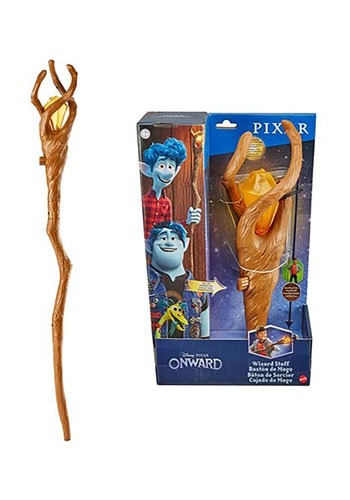 Heading out on a quest of your own? Maybe you're planning a trip down the Path of Peril to find Raven's Point, or maybe you just want to swing on down to the Manticore's Tavern. Then you're going to need a magical weapon that can help you cast all of the spells from the Quests of Yore. You know, something that you can use for Aloft Elevar, Accelior, and Boombastia. Perhaps one that has a genuine phoenix gem on top. Or... at least something that lights up and makes some snazzy wizard-like noises! Well, this Disney Onward: Wizard Role-Play Staff is an officially licensed toy from the movie that will have any young wizard ready to practice their magic.

This molded plastic Onward wizard staff is shaped like the one seen in the animated film. It even comes with a fake orange phoenix gemstone at the very top! With just a press of the button on the side, the staff recreates sounds from the movie and lights up. You can even make the gem rotate to help give it a truly magical look. It works great for playtime, or for authentic cosplay as Ian Lightfoot.