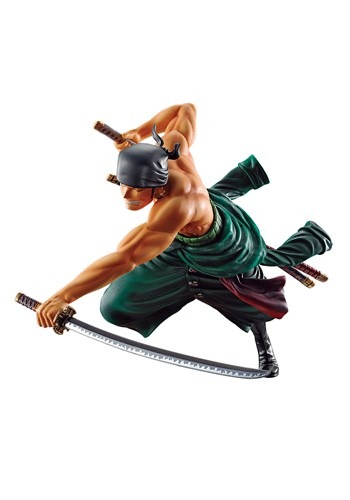 Armed to the Teeth

Have you ever thought about that phrase? What exactly do teeth have to do with being well-equipped for battle?

Well, Roronoa Zoro took that phrase pretty literally. Not only does he swing a sword in each hand, but he's been known to do battle with a third blade wielded in between his teeth! That's how dedicated he is to the art of the sword... and we hope that the Straw Hat Pirates have one heckuva good dental plan! This particular statue of the character doesn't have him using a sword in his mouth, but he looks deadly just the same.

This One Piece Roranoa Zoro Battle Memories Ichiban Figure is crafted by Bandai and is inspired by the legendary character from Eiichiro Oda's massive One Piece series. The figure is frozen in a daring battle pose, a katana blade in each hand... and his trusty third sword tucked safely in it's scabbard at his waist. The figure has an astounding level of detail, including wrinkles in his clothes, the pattern on the edge of his blades, and his signature scar on his eye. Each muscle is shaped perfectly to really capture Zoro in full 3D detail. He'll be the centerpiece of your anime collection!