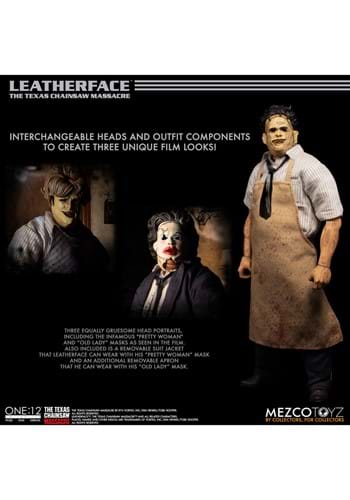 When The Texas Chainsaw Massacre came out, it changed the horror genre. The film featured a level of gruesomeness and depravity that was unmatched by other horror movies at the time. And, for many, Leatherface became the definitive image of a pure nightmare. The chainsaw-wielding maniac is king when it comes to horror villains and this One:12 Collective Leatherface 1974 Collectible Figure brings the nightmare into your collection.

This Leatherface collectible is officially licensed from The Texas Chainsaw Massacre, arguably the greatest horror film of all time. The figure is unmatched in detail and comes with multiple cloth outfits, so you can customize him to look like his many appearances in the movie. He also comes with interchangeable hands, heads, weapons, and blood splatter accessories. He also comes with a chainsaw, which fits into his hands. Your collection doesn't know the meaning of terror until you have Leatherface at the front and center of it!