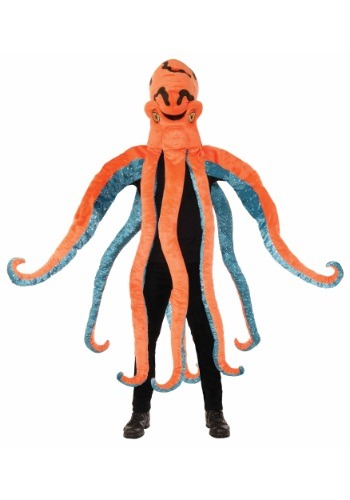 We are not going to lie to you, this one of those costumes that we wish was not just a costume. No, this is not because we want to have an octopus on our head, it's because we want to BE an octopus! At least, one that can walk on land. We don't want to live in the ocean, we just want the convenience of having 8 arms! Think of all the tasks you could accomplish with eight arms.

You could be the worlds fastest grocery bagger, or the worlds fastest cup stacker. You can carry 8 coffees at once, and you can probably juggle 20 different items at once! 8 arms means 4 times the productivity we currently put out. Can you imagine? The only downside we can think of is finding a shirt that fits, we don't see many stores that make shirts for people with 8 arms.

This costume will turn you into an 8 tentacled beast of the sea! You'll be wearing what is essentially a really large mask. The costume slips over your head and your arms slip into two of the tentacles. You'll be able to see thanks to a mesh covering on the mouth, but vision will be at least slightly impaired. But hey, who needs to see when you can feel around with your eight new limbs! For best results, we recommend wearing all black under your costume. it's just harder to see!

When you have this many limbs, people are going to start asking you for favors. "Hey can you carry this, hey can you carry that?" The favors will be seemingly neverending. Just make sure that you remind them that you can't actually move all 8 tentacles and hopefully they will just let it go.