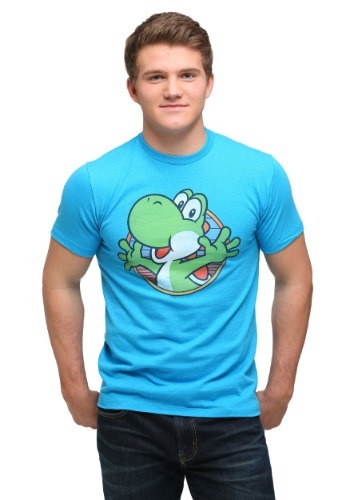 Besides being one of the coolest characters to have ever come out of Mario Bros, have you ever noticed how much fun it is to say Yoshi’s name? It kind of sounds like sliding down a polished wooden banister or across a glossy wooden floor while wearing thick and soft woolen socks: “Yooooshhhhhiiiii!”

Yet one of the best things about T. Yoshisaurus Munchakoopas is that he’s not just another cute animatronic dinosaur: This dudes’s got some talents! Whether it’s his fantastic knack for grasping and throwing stuff with his tongue, his freaky ability to swallow said objects and then regurgitate a spotted egg (which sounds gross, but it’s actually pretty cool, no?), or our personal favorite, his version of the “Ground Pound”, which is pretty killer to behold. But even though he can sting like a bee, don’t think he can’t float like a butterfly: The “Flutter Jump” is one of his all-time best signature moves! Oh, and those looks ain’t for nothin’: Yoshi’s snoze can detect hidden collectibles as well as flowers by smell, and can even be used as a weapon. So rad!

Which is all to say: This Nintendo Yo Yoshi T-Shirt is great! Made up of 50 percent cotton and 50 percent polyester, this tee is super comfortable, while the street cred of the classic Yoshi design also makes you look super cool. It's the perfect addition to any Nintendo fan's wardrobe, and it also makes a great gift for Mario lovers young and old!