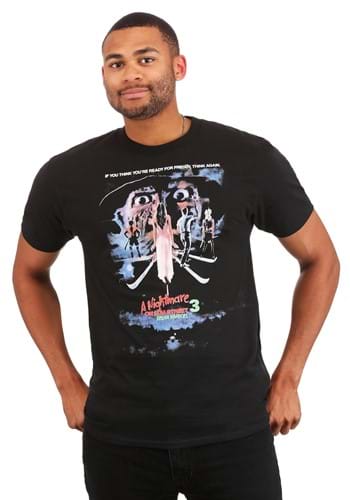 Time to Fight Back

Are you tired of Freddy Krueger? You know, the way he prances around in people's dreams, thinking that no one can touch him? And the way he tries to murder unsuspected victims during their most vulnerable moments? Well, maybe you could try to discover some dream powers, just like the grown-up Springwood High kids from A Nightmare on Elm Street 3: Dream Warriors. Of course, it means you're going to have to fight Freddy. You'll also have to try to send his old bones to rest if you want him to be gone for good...

Sounds dangerous. A little TOO dangerous if you ask us. Maybe you should leave all of the dream fighters to them and show your support by wearing this Nightmare on Elm Street Dream Warriors T-Shirt.

This Nightmare on Elm Street shirt is officially licensed from Dream Warriors. The black shirt is made of cotton, so it's both comfortable and it will hold up to daily wear. The front of the shirt has a printed image of the original theater poster. It's a must-have shirt for any fan of Freddy Krueger. Just don't wear it to bed unless you're ready to face off against Freddy!