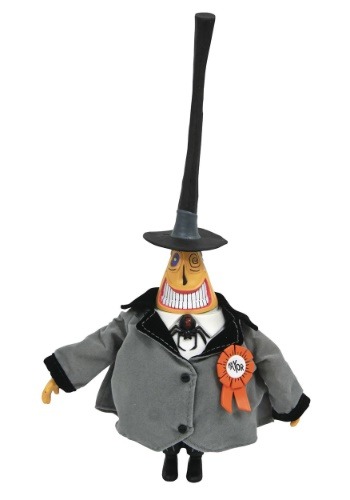 At Christmas, some people like to put up manger scenes. But you and yours have gotten into the habit of setting up a different kind of diorama: The Nightmare Before Christmas! We think that's pretty cool. In fact, we may have something similar going on in the break room right now. Maybe.

If you're planning on collecting and displaying all the best from Tim Burton's masterpiece, then you'll definitely need this Nightmare Before Christmas Mayor Silver Anniversary Figure! It features everyone's fave politician and his iconic hat. It would be a huge no-no to leave the Mayor out of your Halloween Town tableau. Don't make him put on his frowny face.

This figure measures 10" tall and comes with a telescope light and stand! He is clothed in a real cloth costume, including his "Mayor" ribbon button at the front of his jacket. Fully posable and officially licensed, he's the real deal and belongs in your collection!

Turn That Frown Upside Down

Of course, you could start your own tradition and put your Nightmare scenes out for next Halloween, and then leave them up straight through Christmas. The Mayor would definitely approve—he loves an early planning session for Halloween! It makes him smile.