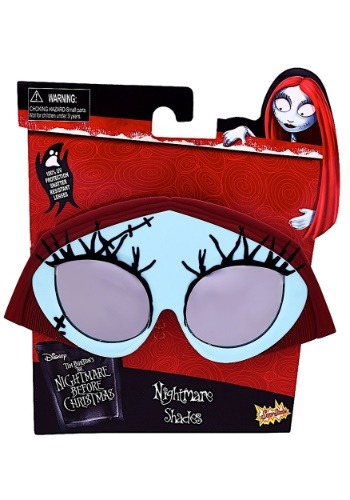 It's sweet that Sally only has eyes for Jack the Pumpkin King. Jack doesn't have eyes (just barren sockets) but the same sentiment goes for him as well. It's easy to see why Jack is so smitten with the spunky red-haired ragdoll. Sally's pale blue skin, large eyes with small black pupils, red lips, detachable long limbs, and straight crimson hair make her quite the catch, especially when you compare her to all the other kooky characters in Halloween Town.

If you want to look like Jack's one true love on the spookiest holiday of the year then you must recreate her large round eyes, first and foremost. Luckily, this Nightmare Before Christmas accessory acts as both sunglasses and a half-mask in one. Put on these shades to transform yourself into the resourceful rag doll. You'll have all of Sally's key features; the pale blue skin, the stitch over one eye, the spiky eyelashes, and large almond-shaped eyes. This accessory accompanies any Sally costume that you choose!