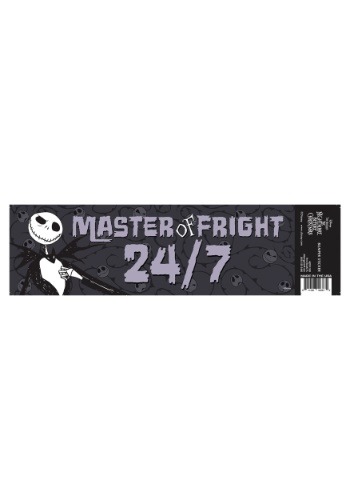 Jack is one scary dude. His skin is completely gone so all of his bones are exposed and his creepy grin stretches across his entire face. If you met Jack without knowing anything about him, it's normal to be alarmed and slightly spooked (he's the Pumpkin King, after all), but once you actually got to know the guy, you'd see he has a heart of gold. (Most people think he has a black heart but they couldn't be more wrong.) Jack just puts on a facade of being big and bad since scariness is his claim to fame but real fans know he's a sweetheart. Help Jack Skellington promote his attempt at being super-creepy with this Nightmare Before Christmas bumper sticker. Slap it on your car and remind people who the ruler of Halloween is (just in case they forgot!)

The officially licensed Nightmare Before Christmas Jack Skellington bumper sticker is printed on a high-quality PVC sticker and measures approximately 10" by 3." The sticker features a refined Jack Skellington and the phrase, "Master of Fright 24/7" on front.

Have an obsession with Jack? Then check out all of our licensed Nightmare Before Christmas home decor and apparel.